Springtails (Collembola) live culture is supplied in a special ventilated tub measured 10 x 11 x 6 cm. They are a perfect food for the top dwelling fish like Aphanius, Aplocheilus, Epiplatys, Oryzias, Livebearers, Tetras, Barbs, etc. It may take up to 10 working days (except holidays and weekends) before this order is shipped. If there are any questions you have then please get in touch before you place an order.

Collembola, otherwise known as springtails, are one of the largest groups of insect-like organisms found in the soil. A close relative of silverfish, these arthropods include over 6000 separate species world-wide. They are no longer considered insects but remain arthropods for classification purposes.

They are named Collembola because each sports an appendage known as a collophore or tube from the first abdominal segment. The common name ‘springtail’ comes from an additional forked appendage located on the forth segment known as a furcula which is locked into another appendage on the third segment known as a tenaculum. It is held in place by this locking mechanism until it is released against a hard surface causing the animal to ‘spring’ into the air some 20cm. This is not controlled movement but a survival mechanism.

Springtails are wingless hexapods (six-footers) with incomplete metamorphosis. There are no larval or pupae stages; the newly hatched springtails resemble the adults. They molt several times during their life cycle. They are typically small (less than 6 mm), feed on decaying vegetation and organic matter found in the soil, and require high humidity to survive. They will also feed on the recently dead springtails from the groups. They are not usually considered a major plant pest unless populations are so high that they begin feeding on soft plant tissues. At least one important species is a garden or greenhouse pest because it will feed on pollen and soft flower tissues. Soft tissues especially involve flowers or florets and they seem more attracted to plants with lighter colours.

Springtails can best be controlled through modifying growing practices. Over-watering, plant and soil debris left on floors or bench tops, and poorly aerated mediums are all factors that contribute to population increases. While insecticide controls are available, the best form of control is using proper cultural practices. A good video culturing instruction can be seen here. 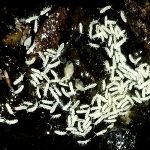