Enriched Brine Shrimp (Artemia salina) is supplied in 100, 150, 200 and 3000 ml sealed plastic bags. Just choose your preferred volume from the drop-down list indicating the quantity below. It may take up to 10 working days (except holidays and weekends) before this order is shipped. Weekly orders are suggested to ensure freshness. If there are any questions you have then please get in touch before you place an order.

During the past decade, Artemia has become the most popular fodder for both salt-water and fresh-water fish bred in domestic aquariums or industrial ponds. This amazing species won its reputation not only thanks to its nourishment value but also its way of reproduction and its ability to survive in the most extreme conditions.

Enriched Brine Shrimp (Artemia) closely duplicate the nutritional value of many of the small freshwater crustaceans found in the natural habitats of our fishes. They have the added advantage of being enriched by special micro foods containing extra vitamins and amino acids to condition most freshwater and marine tropical fish. Moreover, they are free from freshwater parasites and bacteria since they come from water with heavy salt concentrations.

Storage, or holding live brine shrimp at cold temperatures, is a way of preserving the nutritional quality while maintaining a live food. Place the bags in the refrigerator. The brine shrimp should remain alive for a few days for later feedings. Simply pour the brine shrimp into a fine mesh net, rinse with fresh water, and feed. Uneaten brine shrimp will not foul your aquarium, but do feed according to your aquatic animals and aquarium size. 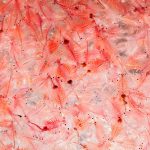